Commercial solar panel degradation: What you should know and keep in mind

As we’ve seen, there are a number of important characteristics to consider when making a solar panel decision for your business. One of the most critical is understanding the degradation rate of the solar panels you’re evaluating, how it compares among manufacturers, and what impact solar panel degradation can have on your organization’s bottom line.

What is solar panel degradation and what does “degradation rate” mean?

It may sound ominous, but “degradation” is just an industry term used to describe the decline in output that all solar panels experience over time. In fact, were he around today (and wouldn’t he have been electrified by solar technology!), Ben Franklin would no doubt have added solar panel degradation to his famously short list of life’s certainties. 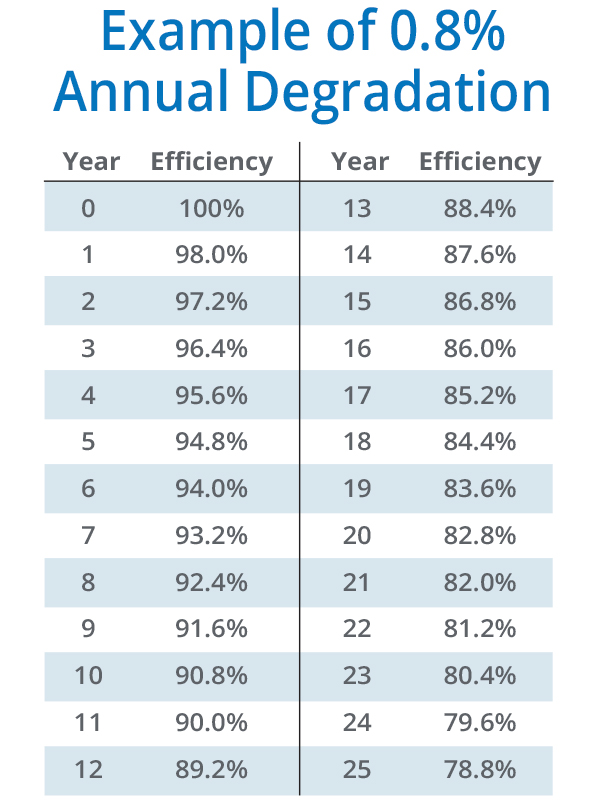 So yes, all solar panels degrade. But they don’t all degrade at the same rate—and that’s what matters, and warrants a closer look. In their first year of operation, panels generally undergo short-term degradation ranging from less than 1% to 3%. After that, according to a 2016 study, solar panel performance declines by an average of 0.8% to 0.9% each year.

Now, you’re probably wondering, “How long do solar panels last anyway?” Good question. Comprehensive testing done by commercial solar panel manufacturers suggests that the lifespan of solar panels is somewhere between 25 to 40 years, depending on the manufacturer. That doesn’t mean they stop working or generating electricity after that time. It simply means their energy production has declined to a point beyond what manufacturers refer to as a panel’s “useful life.”

What impact can commercial solar degradation rate have on your business?

So, we’ve seen how an average solar panel would degrade. But what if you’re considering a panel that degrades more quickly, say at a rate of 1.0% each year—or more slowly, for instance at a rate of just 0.25% each year? Is that difference a big deal?

It definitely can be. The fact is, those six- or seven-tenths of a percentage point in degradation rate could add up to thousands of kilowatt-hours of energy lost every year, depending on the number of panels and how long they’ve been generating electricity. That means you spend money pulling power from the grid rather than from your installed solar panels—which, for a large commercial installation, could mean hundreds of thousands of dollars over the system’s lifetime. A big deal indeed.

That’s why it’s important to consider whether it would make better long-term financial sense to save up-front on lower-quality panels with a higher degradation rate, or invest in higher-quality (and potentially more expensive) panels that degrade more slowly. The difference in degradation rate can translate into a significant amount of money over the next 10, 15 or 25+ years—and should be considered upfront as you evaluate your options.

“The difference in degradation rate can translate into a significant amount of money over the next 10, 15 or 25+ years…”

In general, solar panels are extremely durable and built to withstand high winds and heavy snow loads. That said, keeping an eye on your commercial solar panel system—and making sure it’s well-maintained—could lead to a lower degradation rate each year, and more output over a longer term. Here’s a look at what causes solar panel degradation, and a few tips for keeping that rate low: 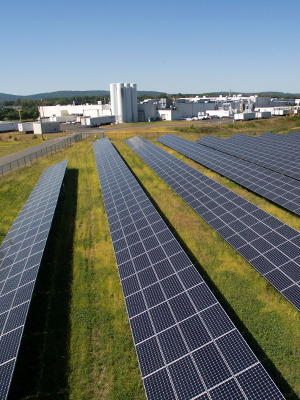 As you compare commercial solar panels for your organization, here are some important points about degradation to keep in mind: